Women behind 'Hidden Figures,' 'Moonlight' and more reveal the strengths they bring to the job as their growing clout (a record number are nominated) may open more doors for female helmers: "Hire, hire, hire. There's always a way you can do it."

Donna Gigliotti first fell in love with film when she went to see The Sound of Music with her mother in her hometown of Utica, N.Y. "I was completely exhilarated by the experience and I thought, 'I have a choice,' " says the Oscar-winning producer of Shakespeare in Love, up for her second Academy Award for Hidden Figures this year. "I can either go and become a person that makes movies like this or I could become a nun."

In light of women's slow progress in Hollywood since then, the convent doesn't look so bad. After two years of #OscarsSoWhite, the 2017 ballots include a significant number of people of color both above and below the line. But things didn't advance as much overall for filmmakers with two X chromosomes: Outside of the acting categories, only 20 percent of the nominees across 19 categories are women — a share that barely has budged in decades.

Still, there are significant bright spots on the Oscar ballot: a few historic firsts (black women nominated in documentary feature and editing; a female team in sound) and a record number — nine — of female best picture nominees. And when eight of those producers gathered at The Beverly Hilton on Feb. 6 to talk about this year's bad news/good news scenario, they mostly were in a mood to celebrate the good. 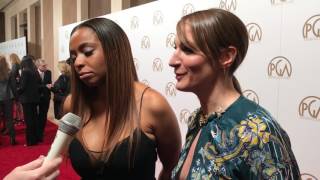 Kimberly Steward up for Oscar gold with ‘Manchester’

Exclusive: Catching Up With Manchester By The Sea Producer Kimberly Steward